A BRIEF HISTORY OF THE LAKE VERMILION AREA

Lake Vermilion derived its name from the translation of "Onamuni", the Ojibwe name meaning "Lake of the Sunset Glow"- which the French translated to "Vermilion", a Latin word for a color ranging from yellow to red.

There is evidence of a long history of human habitation in the area. Archaeological evidence places a succession of American Indian cultures at Lake Vermilion, starting before 7000 B.C. and continuing to the present day. Archaeological and cemetery sites can be found throughout the area, and early prospectors noted evidence of jasper and quartz mining that predated European exploration.

In the mid 1600’s, French explorers and fur traders became the first Europeans to discover the shores of Vermilion. They immediately began a trade friendship with the Sioux Indians who already inhabited the lake, and several decades later with the Chippewa who still reside in the area today. Fur trade flourished, and in 1670 the French established the first port on the lake. Vermilion was an important link in the chain of rivers and lakes that connected Lake Superior to Rainy Lake, and ultimately Hudson Bay. Voyageurs would enter Vermilion through the Pike River on the south side of the lake and leave through the Vermilion River on the north side. Another important route took Voyageurs through Mud Creek, located on the east end of Vermilion, and eventually on to the fur trading center of Grand Portage.

So important was the Duluth to Rainy Lake travel route, it was used as the definition of the international border under the Treaty of Paris in 1763 in which France ceded Canada to Great Britain. The northeast shore of Vermilion, and the area that is now Tower, were considered part of Canada, while the southwest shore, and what is now the Cook area, were considered part of the American territory. With this, the British made economic claim to all of Lake Vermilion and built their own trading posts on the lake. All furs from the region were sent north to the Hudson Bay Company in Canada. Due to the vague description of international border, the U.S. and Great Britain argued its course for many years. In 1842, American officials convinced Great Britain that the Grand Portage travel route located to the north was the proper border described by the Treaty of Paris and thus both Lake Vermilion and the Arrowhead region were brought into the United States. 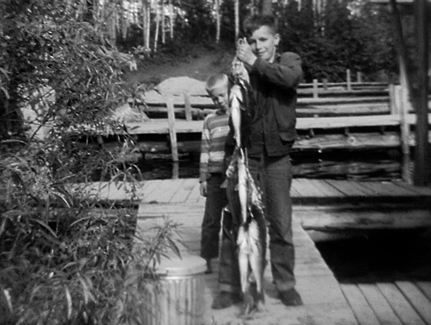 In 1865, deposits of gold along Vermilion were reported by a geological survey team and the gold rush was on! An expedition was sent to cut and clear a crude road from Duluth to the gold fields along a centuries-old travel route used by Native Americans. The road they built became known as the Vermilion Trail and is roughly followed by County Road 4 and State Hwy 135 today. The Vermilion Trail between Duluth and Tower was no picnic. It took three days and 2 nights to cover the more than 100 miles by wagon. It was stated that only in the winter could teams be used. In the summer, the swamps were many and long, and no horse could negotiate the trail, so the only way north was by foot. Yet, at times, there were as many as 200 people enroute for Tower and Soudan. Mining began in 1866, but after several years of effort, no appreciable amount of gold was found. The gold prospectors abandoned the area by 1867.

About this same time iron ore was found. However, technological advancement and capital investment did not combine until the 1880’s to begin Minnesota’s iron industry and give birth to Minnesota’s “Iron Range”.

The Soudan Iron mine is the oldest and deepest mine in Minnesota. The first crew of miners left Duluth in June 1882. Initial evacuations were underway when the town site of Tower was laid out in 1882 in anticipation of the iron mining industry.

The official opening of the mine was in 1884 with the first shipments of ore being delivered via a newly completed rail line to Two Harbors. This marked the beginning utilization of one of the richest iron ore deposits in the world. The first workings were open pits. Over time, the mine would include fifteen major open pits and shafts, with twenty other minor workings. By 1890, above ground mining ceased and all operations were underground. Eventually, the main shaft extended to a depth of almost 2,400 feet. The mine reached its peak production in 1892, shipping over 568,000 tons of high-grade ore and employing over 1,800 men. The mine produced over 17.9 million tons of ore during its operation.

As the mine grew, so did the communities of Tower and Soudan. Founded at the very edge of the mine, Soudan was a classic company town – the mining company and the community almost indistinguishable. The town began as two sites named Stone and Breitung, each named for a nearby ore pit. The company managed the settlement and built houses, a hospital, a community center, and a sawmill, as well as cleaned the streets and developed wells for clean water.

Tower grew independent of the mining company, but still existed to serve the mine and its workers. The City of Tower, incorporated on Nov. 11, 1884, is the oldest city north of Duluth, and grew with the success of the mine. People from all over America and immigrants from many countries came seeking their fortunes. Tower was literally the end of the road. The daily train from Two Harbors and Duluth brought captains of industry, loggers, immigrant miners, and union organizers by the car load and Tower was the only outpost of civilization on the Vermilion Iron Range. Thousands made regular trips to Tower’s Main Street to partake in the “amber glow” flowing freely out of saloons and taverns.

Lumber camps, homesteads and businesses developed quickly across the lake. To maintain water levels, Tower’s logging interests erected a dam in 1890 at the head of the Vermilion River. The site was also the location of a lumber camp and sawmill. In 1907, the camp was converted to a moose hunting camp named Hunter’s Lodge, making it one of the first resorts on the lake. Tourism began as many lodges and resorts were founded in the late 1800s to early 1900s, and steamboats were used to transport visitors around the lake. Although the steamboats are gone, some of those early resorts still operate today.

Maintaining the growth of the mining industry demanded food and lumber. The lumber producing town of Ashawa began to develop near the west end of Vermilion in 1902. The town was renamed Cook (after a local lumberman) because “Ashawa” was similar to the name of another town in Minnesota. Today, Cook remains closely tied to the same forest products industry that helped shape the town one hundred years ago.

Mining operations ended in 1962, with the last stockpiled ore shipping the following year. U.S. Steel Corporation donated the mine and surrounding lands – including shoreline along Lake Vermilion – to the State of Minnesota in 1963. That same year, the Minnesota Legislature created Tower-Soudan State Park (now called the Soudan Underground Mine State Park). U.S. Steel made a second donation of land in 1965 which is also part of the current park. In 1966, the Soudan Mine was designated a National Historic Landmark.

Starting in 1979, the Division of Parks and Recreation began working with the University of Minnesota concerning the use of the Soudan Underground Mine as a laboratory for physics research. The mine offers a unique research environment. The depth of the mine shields equipment from cosmic radiation and other high – energy interference that would hamper data collection. Also, the age of the surrounding rock means it emits virtually no radioactive particles of its own. The first physics experiment, intended to observe proton decay, began operating in the mid-1980s in a cavern carved at the mine’s 27th level. A second experiment – called Cryogenic Dark Matter Search or CDMS II – also operates Neutrino Oscillation Search or MINOS experiment. The experiment detectors were assembled underground.

Tower made national news in 1996 when, around 9 AM on February 2, a new Minnesota record for the coldest official temperature ever recorded was set. The -60 degrees Fahrenheit record still stands.